Antifreeze Toxicity - The Cure Is A Good Stiff Drink! 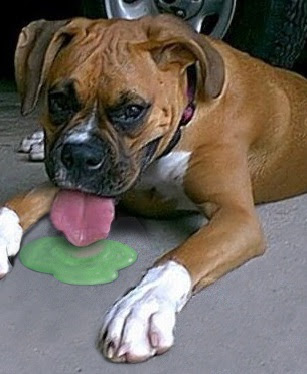 Antifreeze poisoning is extremely common in dogs and other small animals due to its sweet taste and widespread availability to animals, whether in garages, carports, or puddles. Unfortunately the knowledge of the dangers of antifreeze to pets is not widespread, and thousands of animals die every year from ingesting it. Antifreeze poisoning affects the brain, liver, and kidneys, although death most often results from renal failure within days.
The toxic ingredient in antifreeze is ethylene glycol, an ingredient also found in hydraulic brake fluid. Antifreeze has extremely high concentrations of ethylene glycol, up to 95% in most cases. Furthermore, ethylene glycol is so toxic that it takes just a couple of tablespoon’s worth to fatally poison a dog.

Recently, a puppy in Australia who ingested antifreeze was saved by her veterinarian using an unusual cure – a bottle of vodka. Cleo, an American Staffordshire puppy, who had been a Christmas gift to her owner, became sick after licking antifreeze she found on some spare car parts in her owner’s garage. Within half an hour, she was unsteady and swaying on her feet like she was intoxicated. She was also already at the risk of kidney failure. Her owner realized something was very wrong and rushed Cleo to the emergency vet’s office, where he began administering vodka to the pup every six hours for two days through a tube placed in her nose. Cleo apparently felt the effects of all of the alcohol in her system. According to her owner, Stacey Zammit, Cleo’s eyes were really bloodshot and she was quite unsteady on her feet from being “so wasted.”


The Hair of the Dog

Apparently this “hair of the dog” (no pun intended) treatment is rare, but effective because the alcohol stops a chemical reaction in the poisoning victim’s body. The vodka was administered in the hope that it would, in effect, mop up some of the ethylene glycol in Cleo’s system. Alcohol can actually keep ethylene glycol from being metabolized into toxic chemicals within the body, which allows it to eliminate the poison through its own waste systems. Her vet said that without the vodka treatment, Cleo would most likely have developed kidney failure and died. Without any ethanol, which is the preferred treatment for antifreeze poisoning, the vodka was the only antidote available to save Cleo’s life.


Not as Simple as it Sounds

The treatment was not cheap, costing the owner more than $2100, plus, we can assume, the cost to replace the vodka which had been a Christmas gift to the veterinarian. It was money well spent. After her four day stay in the hospital, Cleo has made a full recovery and her owner reports that she is a very happy puppy. She is certainly lucky, thanks to the observational skills of her owner and the quick thinking of the veterinarian on duty.